What Kind Of Party Is This? There's No Beer & Only One Hooker

I'm still very new to this crochet lark. My Mum can crochet like the Devil plays the fiddle* (very fast & very well), but could never slow down enough for me to keep up with her. So every attempt to crochet ended up in a tangle of yarn & a sudden & passionate distrust of anything that involved yarn & a hook (that includes you, French knitting. How much of my youth was wasted on you, until I realised that 11 meters of thin tube knitting was only useful as a cat toy!).
The most frustrating things was hearing seasoned crocheters cheerfully say 'Oh, it's easy!' as their fingers moved in a blur and doilies (another pointless thing) were seemingly spun out of thin air.

Grrr. Crochet isn't easy. It's simple, but it's not easy.

After several attempts to learn from books, and then getting frustrated at the aforementioned books (insert hook where?), a friend of mine recommended 'The Happy Hooker' by Debbie Stoller (who gave us the novice knitters bestest friend 'Stitch 'n Bitch', which would be the best knitting book on earth if they had replaced that bloody ipod cosy with a good sock pattern).
Huzzah! For now I can crochet. Mostly.

Will be posting some crochet patterns soon, as well as blathering on about seeds.

*Or guitar, if you're more Robert Johnson inclined. And who isn't?!
Posted by littleblackfox at 08:23 No comments: 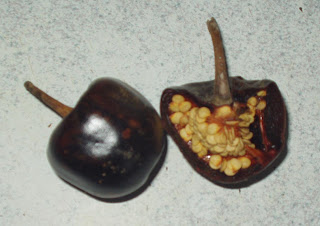 It's been a while since I last talked about chiles (and about mmm 3 hours since I last ate some), so today it's the turn of a rather overlooked chile, which is a shame, as it's really lovely, the Cascabel.

Cascabel means "Little bell", rather appropriately, as it is a small (2-3cm in diameter) cherry shaped chile. When dried the loose seeds in the chile rattle when its shaken, hence it's other common name of Rattle chile. Another name is chile bola (ball chile). When fresh, cascabel comes in red or green, though when dried it is a dark red/brown colour.

It's flavour is woody & acidic, with a bit of tannin in there too. It's spicey, but not hot, somewhere along the lines of Jalapeno or Guajillo chiles.

What can you do with it? As with the other chiles I've mentioned, you can deseed & remove the stem, toast briefly in a dry frying pan & soak in hot water until soft, then drain & blitz in a blender or food processor with a bottle of passata or a can or two of tomatoes to make a sauce for enchiladas, chilli or lasagna. Or chuck in a blender with a can of chickpeas, a couple of cloves of garlic & the juice of a lime for a tangy houmous. Or you can chop & fry them with onions & garlic, add a cup of rice & 2 cups of vegetable stock & simmer until the rice is done (stirring in a can of black beans & some sweetcorn at the end of cooking) for spicy rice.
Om Nom Nom!
Posted by littleblackfox at 11:40 No comments:

Labels: Are you a Mexican or a Mexican't?, Chile 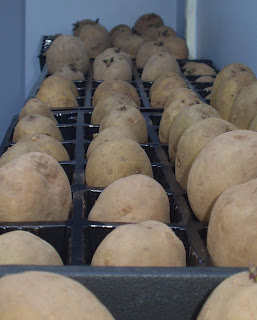 Despite the snow* & it being the Coldest-February-Since-Records-Began, here at the House At The Top Of The Bloody Great Hill thoughts have turned to growing veg.

Yes, the house is up for sale, but considering the currant economic climate, we'll probably be here until the summer anyway, so we may as well grow some veg.
So I've been thinking about planting quick-cropping vegetables, interesting salads, baby root veg & dwarf beans (which mature faster than the taller varieties). The sort of things that go from seed packet to plate in 1 or 2 months. That way it's a Challenge rather than an Inconvenience.
But we still want to grow potatoes.
Luckily, previous experiments in growing stuff have shown us that it's pretty easy to grow spuds in containers & pots. So the plan is to grow as many potatoes as possible in as many containers as possible. We'll be growing spuds in trugs, patio planters (a fancy name for reinforced woven polyethylene sacks), buckets, pots, troughs and malt sacks.
Potatoes grow surprisingly well in containers. You don't need an allotment or a big garden to grow your own tasty spuds, just space for a few pots.
You'll need to get your seed potatoes (small potatoes, usually around the size of an egg that are specially grown & disease & virus free. You can use shop bought potatoes, but they may have blight or some other nasties in them, and may not produce as many spuds as a certified seed potato) from a good supplier. The Organic Gardening Catalogue has a good range of potatoes. There are many tasty, unusual & interesting varieties of potato out there, so it's worth having a look around. This year I'm trying out a variety of potatoes from Thomson & Morgan, as they have a wide range of unusual spuds, such as the Highland Burgundy Red, Salad Blue & the Shetland Black.
Potatoes come in 4 types, which mature at different times. You'll need to keep remember this when choosing potatoes. When do you want to be eating your spuds?
First Earlies mature very quickly, so are usually ready to eat late May to June.
Second Earlies mature a little later and are ready to harvest late June to July.
Maincrops do not do as well in pots as First & Second Earlies, they do grow but produce smaller yields than if they were in the ground. They are ready for harvest between September to November.
Salad Potatoes are firm, waxy varieties that mature around June & July. A few varieties, such as Pink Fir Apple are not ready for harvest until August or September.
Before you plant your potatoes, they'll need to be chitted. Chitting basically means sprouting the potatoes. Chitting gets the tubers started & shortens the growing time needed to get a good crop from them, and February is the best time to do it. Potatoes can be chitted in old egg boxes or trays, make sure that you arrange them with the ends with the most eyes facing up (don't worry if you can't see the eyes, after a few days (or weeks, depending on the variety), the potatoes will start to chit & they'll become more visible, and any facing the wrong way can be repositioned) and place in an unheated room out of direct sunlight. When the sprouts are 4 or 5cm long (they'll have teeny tiny leaves on them - Eee!) they're ready to plant out.
You'll be needing a container, then. You can use pots, plastic crates, those polystyrene boxes that watercress comes in. Even a heavy duty bin bag will work. Essentially anything that's around 30cm across & deep. I've found that those black buckets that you can buy for around £1 from DIY centres with a couple of holes drilled in the bottom work beautifully.
Fill your container about a 1/4 full of soil (compost works well, garden soil is also good. I've heard that potatoes grow well in leaf mould too, though I've never tried it. Just make sure it's soil that hasn't had potatoes or tomatoes growing in it the previous year, so won't have any soil borne pests or diseases lurking in it). Place 2 or 3 potatoes in your pot, sprouty parts facing upwards, and cover with more compost. Don't fill the container, just use enough compost to just cover the tubers.
After a few weeks (or longer, depending on the potato variety) you'll have pretty little green plants. When they get to around 15cm tall, you'll need to do some Earthing Up. This just means adding another few handfuls of compost to the container to cover up the stem of your plants (don't worry about covering any of the lower leaves, they'll be fine). This prevents light from reaching the tubers and turning them green. Keep earthing up the potatoes as they grow until the container is full.
Other than that, they don't need much in the way of maintenance. Give them a soaking of water if the weather is dry and look out for any signs of pests or disease. You can wait for them to flower (the flowers are really pretty, similar to borage flowers) & die back, or you can pull them out as the flowerbuds start to appear, and get delicious little new potatoes. Yum!
*By snow I mean The-Stuff-That-Was-Snow-9-Days-Ago-But-Below-Freezing-Nighttime-Temperatures-And-Not-Much-Warmer-In-The-Day-Means-It-Has-Become-The-Hardest-Slipperiest-Substance-On-This-Earth. Just looking at it will sprain your ankles.
Posted by littleblackfox at 02:18 No comments: