There's a song that's been going around in my head (and for a change it's not Amanda Palmers Ampersand) for days now. An odd little song about leaving the world behind & making an island garden. So maybe the long, miserable winter is losing it's grip on North Lincolnshire, and this little fox's thought turn to the garden.

The last week has been spent digging. The soil is still heavy & wet, but I've been forking spent hops (one of the benefits of working in a brewery - spent hops are an excellent addition to soil in the garden, working along the same lines of a green manure, they add organic matter & improve drainage, especially useful if you're soil is on the heavy side) into the raised beds, pulling up the inevitable weeds (that didn't seem at all bothered by the month of snow & ice) & raking it all down to a nice tilth. The potato beds still need going over, and the allotment doesn't bear thinking about.
The little Polytunnel has been cleaned out (and sad wobbly-lower-lip moments were had over the Alstromerias & Geraniums that haven't made it through the winter) & dug over. There's still Pak Choi & Salad leaves growing merrily away in there (of all the things to survive the winter, it would be salad), and shallots & garlic cloves in modules of compost, which will get planted out in the spring.
MikeyFox stopped playing Red Dead Redemption long enough to build a couple of compost bins over the weekend, which are in place & ready to be filled. After what feels like forever, the garden is actually starting to look like a garden, rather than a heap of rubble & nettles.

Being a bit more organised this year, I've got all my seeds ordered, and packed into a big wooden box (I remember when my years supply of seeds fitted into an old boiled sweets tin. Then a pretty green wooden box decorated with flowers. Then a shoebox. Now they all just squeeze into a wooden medical case. By the end of the year, there will only be a few packets of salad & half open beetroot seeds floating around in there. Funny how all this started out with a weekend in London, and a market stall selling yellow courgettes. 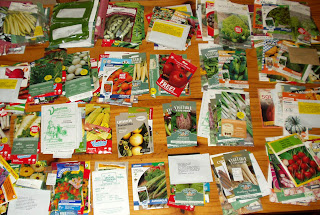 So here's my annual round-up of Places To Get Seeds From.

The Real Seed Catalogue: Still the bestest place to get seeds from. They have a wonderful range of non-hybrid seeds, as well as advice on seed saving & Mad Science (AKA breeding your own varieties). The seeds are excellent quality, with a pretty much 100% germination rate & a consistently good flavour too. Go & buy something from them, you won't regret it.

Nicky's Nursury: I've been buying seeds from these people for almost 10 years now, and they have never let me down. Whether you're after peculiar stuff for traditional Mexican cooking or just a pack of runner bean seeds, they're excellent quality, well packaged (each pack comes with a plant label! Eeee!) and nigh on 100% germination rate. They also have a beautiful range of wildflower & herbs seeds too.

Plants of Distinction: Good quality seeds & interesting & heirloom varieties. If you love growing familiar veg in unusual colours, this is the place to go. They also a have a good selection of podding beans (dwarf or climbing beans where the seeds are harvested rather than the green beans). The Yin Yang dwarf beans are especially good, and this year I'm trying the Jacobs Cattle Gold.

Sea Spring Seeds: A little company that specialises in Chilli & Pepper seeds, though they also have a range of vegetable seeds. Now that I have a polytunnel and Nothing Can Stop Me*, 2011 will be the Year Of Chillis. It was inevitable, really.

And, of course, garden centers!

*Muahaha!
Posted by littleblackfox at 07:49 No comments:

When I think of pudding, what comes to mind is steamed, syrupy sponges or bread soaked in egg & milk & baked until crusty & golden. I completely forget about steak & kidney pudding, about Yorkshire pudding. Haggis, Kugel & pease pudding all slip my mind. Even the Spinach & Stilton bread pudding that I sometimes make (which MikeyFox would gladly eat every day, but I only ever make in early summer when there's an excess of it in the garden) is forgotten. Why do I have it stuck in my head that pudding is sweet?
In Mexico Budín (from the French boudin - pudding) can be both savoury & sweet too.

There are desserts like Budín de Limon, a rich sponge pudding made with ground almonds & lime zest.
But there are also the savoury vegetable dishes (no, I'm not making it up. Savoury. Vegetable. Puddings) such as the Sopa Seca (which means 'dry soup'. They're not dry, and they're not soups either, but rice, pasta or tortillas cooked in a rich sauce until they absorb all the liquid. So they start out soupy & end up dry) budíns; layers of tortillas, salsa & vegetables (usually mushrooms or sweetcorn) topped with cheese & baked in the oven until the tortillas have absorbed the sauce and softened, like a sort-of Mexican lasagne. One of my favourite things to make and eat.
And then there's the other budín. The one that resembles Southern USA's Spoonbread. Light, almost souffle-like, with a little bit of wobble to it. Kind of like a quiche without the pastry.
And that's what today's recipe is.

Preheat the oven to 180C/350F.
Fry the onion in the oil until softened. Add the garlic, then remove from the heat & stir in the courgettes. Add the breadcrumbs, masa harina, pumpkin seeds (saving a few for decoration), herb & seasonings. Add the milk & mix well. Spoon the mix into a greased flan tin & top with the reserved pumpkin seeds. Bake for 35-40 minutes, or until golden brown. 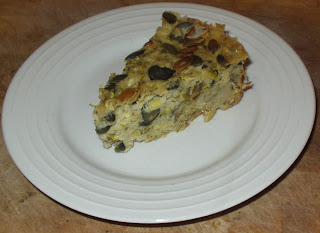 Serve with salad, steamed veg, a rich mole or as a not-entirely-guilty late night snack (it is made of vegetables after all!).
This is a good recipe for mucking about with. Courgette flowers are a classic ingredient, as is sweetcorn, but any veg you have lying around will work. Brussels sprouts are surprisingly good, especially is you add a bit of blue cheese. If you fancy something a bit spicy, a teaspoon of smoked paprika would go down well. Or substitute the milk for fromage frais, cream cheese or quark.
Om nom nom!
Posted by littleblackfox at 00:20 4 comments:

The Morning After The Night Before

MikeyFox & myself woke up this morning feeling a little on the, um, delicate side (damn you, Talisker, and your dubious yet irresistible charms). Despite really wanting to flop on the sofa all day & drink tea, we hauled our sorry arses out of the house and down to the allotment for some fresh air & exercise.
The sudden bad weather has not been kind to the plot. The Oca has turned to mush (there's not enough fleece in the world to protect it against -18C nights), and the leeks are in a sorry state. But the kale & brussells are all holding their own, and the ground had thawed out enough to dig up some Jerusalem Artichokes (which MikeyFox made into soup - yum!)

I was a bit saddened to have lost all my Oca, though I will be growing it again next year, as they're really tasty. So to cheer myself up, I decided to do some messing around with wheat gluten and some beetroot that I had dug up from the garden and roasted the day before.
Yes, I have been making more Beet-Meat, behold! 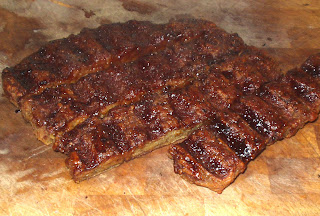 They're made using one of those health grills (I say health grill, I mostly use it to make cheese & chutney toasties), the gluten mix is seared on the grill and then baked in the oven, slathered with barbecue sauce, until they're nice & chewy. I really love how the grill gives them a dense texture without being tough & chewy seared ridges, and the barbecue sauce caramelises in the oven and gives them an addictively sticky coating.

1 1/2 cups wheat gluten
1 tsp vegetable stock powder (I used marigold, but any will do)
2-3 beetroot, roasted & peeled (you can use a couple of those cooked vacuum packed beetroot that you find in the salad section of the supermarket, just make sure it's not in vinegar)
1 onion
2 cloves garlic
1 cup water
1 cup barbecue sauce (I used Jack Daniels barbecue sauce, as it's not too sweet, but use whatever you like the taste of)
spray oil (or a little vegetable oil)

Preheat the oven to 200c/400f & grease a cookie sheet or large pan. Plug in the health grill to give it time to warm up.Put the onion, garlic, beetroot, vegetable stock & water in a blender with 3 tbs of the barbecue sauce & blend until smooth. Try not to think about John Carpenter films. Especially not The Thing. Put the wheat gluten into a large bowl & add the alarmingly red blender gloop & mix. Don't spend too long mixing it, or it'll get tough & rubbery. Divide into 4 pieces and flatten each piece into a rectangle about 1cm thick. If you have spray oil, give the grill a light spray. If not, pour a little oil onto your hands and rub each piece of gluten to cover it.
Slap your gluten on the grill (you should be able to fit two pieces in there, but don't worry if there's only room for one) & leave for around 5 minutes, or until the surface is seared and browned (don't try any yet, it'll all be uncooked dough under that crust!). 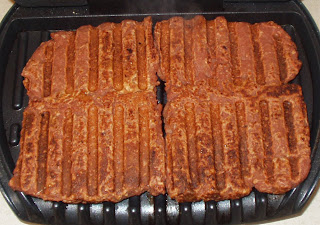 Lay on the cookie sheet & score with a knife into rib-sized pieces (you don't want to cut all the way through, just perforate it enough that when it comes out of the oven you can tear it into rib strips). With a pastry brush or a spoon, cover the ribs in barbecue sauce. Put in the oven for 20 minutes. After 20 minutes are up, flip the ribs over & baste the other side in barbecue sauce, then it's back in the oven for another 20 minutes.
Serve with mash & seared sweetcorn, in a bun with lots of coleslaw, or straight off the tray whilst watching a guilty pleasure on TV (hello, new series of Primeval!) and don't be shy about licking your fingers.
Posted by littleblackfox at 12:44 11 comments: