Sea Creatures Stared At Us & We Stared Back At Them

The Summer Solstice has been celebrated since way back when people first started paying attention to what the sun was up to out there. But in this little patch in the Marshlands, we celebrate it as the day MikeyFox & I tied the knot in our tails (and what better day to have your wedding than the longest day of the year?). This year we celebrated 8 years of being merrily tangled with a trip across the Humber to Hull's The Deep. 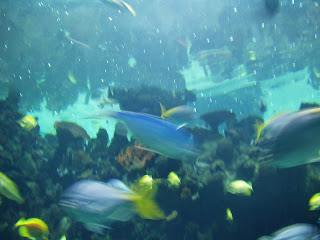 The Deep is the worlds only submarium, which is an underground aquarium. There is something a little disconcerting about seeing an aquarium from the bottom looking up. 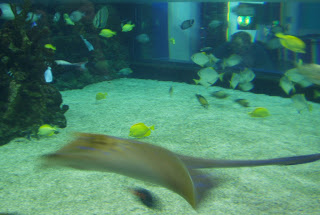 A brief glimpse of the Blue Spotted Stingray, who was a bit of a show-off when I was taking photos. 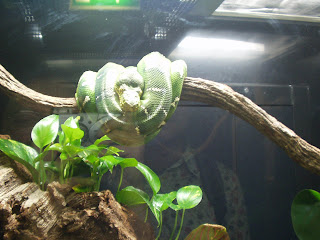 But it's not all about the big fish. The Deep is a conservation & education charity, and take part in research programs & campaigns for conservation. When we visited there was also a non-piscine exhibit called 'Living Rivers', a look into the Rio Grande, Amazon & Mekong rivers, and the environmental impact of mining & deforestation in these beautiful environments. The exhibit features the Emerald Tree Boa above, as well as the glorious axolotl. I love axolotl, which isn't that surprising, considering they're Mexican. How can you not love their tiny little digits and their coral-like gill stalks. And they can regenerate. They are the Matt Smith of the amphibian world. 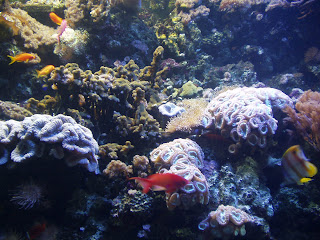 We decamped to the lovely Green Ginger vegetarian cafe. If you're ever in Hull, pop in for a cup of tea & some delicious veggie delights. MikeyFox recommends the bean pie.

We also exchanged 8 gifts. They were mostly little daft things, but I was surprised with this 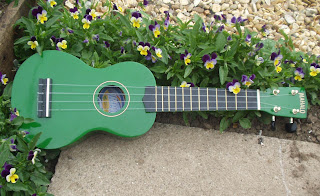 It's a ukulele! It's green! It is named Plink, and the tomatoes are regularly serenaded with badly performed 70's heavy metal covers.

Until next time, I'll leave you with Jeffrey Lewis, and the inspiration for the title of this blog...

Posted by littleblackfox at 08:34 4 comments:

Corn, also known as maize (from the Spanish maíz) is one of the oldest food crops, cultivated as far back as 1250BC in the region of Oaxaca* in Southwestern Mexico. Here in the UK we're most familiar with sweetcorn (though when I was a cub, the local sweetcorn crops were referred to as maize, to distinguish it from the fields of corn, which will be confusing to any people from the USA reading this. Corn is what we call wheat. And language is supposed to make communication easier!) though there are several varieties, such as Field corn & Flint corn, which is grown for making hominy & masa (a lime treated dough that is the base of many delicious Mexican foods, from corn tortillas to tamales. Yum!)

Sweetcorn is a surprisingly easy crop to grow here in the UK. Unless you live in the south, you probably won't get the huge uniform cobs that you find in the supermarkets (that have been shipped over from Morocco), but they will have a flavour & tenderness that supermarket corn can't match (as the natural sugars in those tender little kernels start turning to starch the moment you pick them). We always grew sweetcorn when I was a cub, though there was not much variety in seeds. These days you can find a breathtaking range of sweetcorn, from the supersweet F1 hybrids to heirloom varieties in every colour from red to blue!

Sweetcorn is a tender crop, so leave off planting it until the danger of late frosts have passed. You can sow seed under cover as early as April, planting them out in June, but can sow directly into the soil as late as June, so you have just enough time to get some planted out. Or you can buy young plants from garden centres & online.
If you decide to go for supersweet varieties, don't grow any older varieties nearby, as they could cross pollinate & turn starchy.
If you want a reliable, unfussy & delicious sweetcorn, you can't go wrong with 'Double Standard', an open pollinated, non-hybridised two tone (yellow & white, pretty as anything) variety that does well in colder areas & difficult soils. Real Seed offer good quality seeds that germinate beautifully, and something I grow every year. This year I'm also growing some unusual ones - the beautifully autumnal Earth Tones & the intense Black Aztec.

You'll need a sheltered, sunny spot for planting. They're gracious plants, and not fussy about soil. I've grown delicious (but fugly looking) corn on heavy clay soil, and MaFox always managed well with her thin veneer of soil over solid chalk. Corn needs to be grown in blocks, as they are wind pollinated, (unless you're growing them for baby corn, which is basically unpollinated sweetcorn, then they need to be planted in rows) at least 4 plants deep and wide, generally between 35-45cm apart (depending on the variety). Cultivation couldn't be easier, just keep the area clear of weeds & give them a bit of water in dry weather when the cobs start to form. If you live in a breezy area like me, earth up around the base of each plant to encourage stabilising roots to form. They don't really have any pests or problems. You can also grow squashes & pumpkins between the plants, which will scramble happily around them, keeping the roots cool & suppressing the weeds. 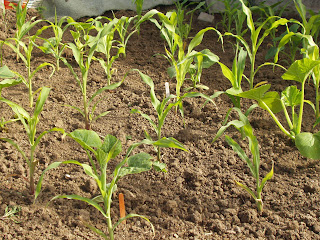 It's ready to harvest between July & October, depending on the variety & when you planted it. They're ready to be eaten when the tassels on the end of the cobs turn brown. The simplest check is to peel back the husk & pop a corn kernel with your fingernail. If a clear liquid comes out, it's not ready, so cover it back up & wait a little longer. If a milky liquid comes out (fnarr!) it's ready to eat. If what comes out resembles toothpaste, it's gone too far. But don't worry, leave to mature & dry out on the plant, then bring in before the first frosts & store somewhere airy & dry for a few weeks and use it for making popcorn (or sowing next year if it's not a hybrid variety). When you do harvest it, eat it straight away. They can be grilled, barbequed, boiled, roasted or eaten raw. And every bite will be worth it.

*Yes, Thomasina Miers, that's Oaxaca, not Wahaca. If they've been cultivating corn & making pottery for 12,000 years, you could at least spell the bloody name right.
Posted by littleblackfox at 23:05 4 comments:

Labels: Grow your own

Do what? remind me of the babe*

I went bumbling around Tai Sun, the Oriental wholesale store tucked away in an industrial estate in Doncaster the other week (if you're ever in the area, track it down, it's well worth a visit), mostly to stock up on jars of stuff, congee & kimchee, and dissuade MikeyFox from buying sushi rice by the 25kg sack, when I spotted this mystery tuber. 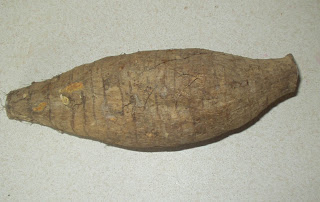 The nice lady there called it 'Yam bean', which could be any of a dozen different root veg (bless you, Linnaeus, for having the whole biomial nomenclature idea. Even if you were a bit of a perv), after some lengthly googling, it turned out to be Kudzu root.
Kudzu root (Pueraria lobata) is most famous for being The Vine that Ate the South (though I know it best as the cover of the first REM album Murmur). It was introduced from Japan to the USA in 1876, and now is reputed to cover 3 million hectares of the Southeastern area. Ouch.
But the young leaves & roots are edible. In China it's used to make slow cooked soups, usually with pork or chicken.
So I decided to make Sancocho.

Sancocho is a traditional Latin American soup that varies from country to country (in Panama it's made with chicken & yam, in El Salvador it's made with tripe & other leftover bits of cow. In the Canary islands it's made with fish. So huzzah, a recipe that allows for some rejiggering). If you don't have any kudzu root, then yam, sweet cassava, eddoes or taro root are all good. Or you can use potato. If you don't have any plantain, you can make it without, but I really recommend trying it with. It's also a delightfully easy recipe, you just throw everything in the pot & then go potter around the garden for half an hour.

Sancocho (Vegetable & Plantain soup) serves 4-6, depending on how gluttonous you feel.

1tbs vegetable oil
2tbs annatto seed, crushed (or annatto oil. Or achiote paste)
1 red chilli, chopped
1 leek, sliced thinly
1 red onion, sliced thinly
2 tsp oregano
1tsp cumin
1 kudzu root (or 1 sweet cassava, 3 eddoes, or 250g of yam or waxy potato)
1 carrot, sliced
500g butternut squash, peeled & roughly chopped (depending on how big you like your chunks)
1 plantain, sliced
2 corn of the cob, cut into thick slices (you could use frozen sweetcorn, but I really recommend trying this. If you get a bag of frozen corn cob pieces, you can use them too)
1 ltr vegetable stock
1 tbs tomato puree (or 2 ripe tomatoes)
sprig of fresh thyme
juice of 1 lime
bunch of coriander, chopped

In a large pot, heat the oil & add leeks, onions, chilli & annatto & fry until the onion becomes translucent (4 or 5 minutes). Add herbs, vegetables & stock, leaving only the lime & coriander. Bring to the boil & simmer for 30-40 minutes (less if you're cooking potato. Check after 15 minutes, and simmer until tender, but not a collapsing mess). Stir occasionally. If it looks a little dry, add more stock. Remove from heat & stir in the coriander & lime, and add salt & pepper to taste.
Serve in bowls, making sure there's a few chunks of corn in there) 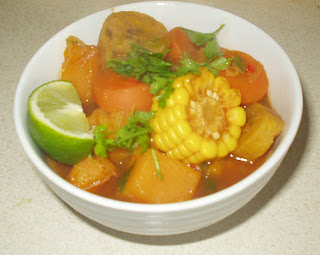 You can serve with boiled white rice, or add some chunks of seitan, TVP or cooked chickpeas, but I like it just as it is.
Inspired by, but not entirely based on, Terry Hope Romero's Viva Vegan. If you don't own it, then get thee to a bookshop & buy it!

*Ah, Labyrinth. You were an awesome film. Even with David Bowie & his mad hair & Disturbingly Tight Trousers.
Posted by littleblackfox at 02:04 2 comments: