And when I say squash, I don't mean the fluorescent orange drink, or what happens to any aphids I find on the apple trees, I'm talking curcubits. Ahh, curcubits, how I love thee. Seriously. It's unhealthy. Curcubita pepo is the big name when it comes to this family of easily grown edibles, consisting of summer squashes such as Courgettes, Crookneck, the amusingly named Dhudi (a summer squash used in South Asian cooking) & Pattypan squash, as well as a few pumpkins & winter squash like Spaghetti squash, Delicata & Acorn. C. moscata is the Butternut squash family, and C. maxima is, as the name suggests, the big 'uns. Kabocha, Hubbard, Uchiki Kuri & all those other large, long season pumpkins & squashes that store well over winter. 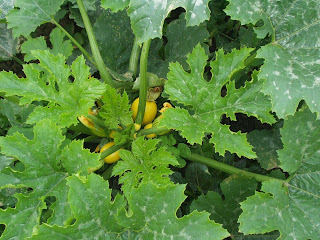 Squashes are really easy to grow, and produce fantastic yields for very little work. If you don't have much room for growing veg, setting aside a patch of land for a courgette or summer squash is something that you won't regret. They're greedy little blighters, so you'll need to give them a good sized space. If planting straight into the ground, space them 75-90cm apart, or in as large a large pot as you can find (nothing less than a 30cm pot or bucket, but something a bit bigger if possible). You can also plant 2 or 3 to a grow bag. Be sure to water them regularly, whether they're in soil or in pots. If space is limited, try bush varieties such as Verde di Milano (a dark green & very reliable little number), Di Nizzi (a round green courgette), Striato d'Italia (stripey green) & Atena Polka (a sunny yellow, high yielding variety that I grow every year). They are happy to be planted 60cm apart, and will do better in pots than the trailing varieties. If you would love to grow Pumpkins as well, but don't have the space, try Summer Ball, a delicious round yellow courgette that, when left on the plant, matures into beautiful orange 1kg pumpkins. Whatever variety you go for, put it in the sunniest spot available. If you can dig compost or manure into the soil beforehand, even better.
All the grow your own books will tell you that 1 or 2 plants will be enough for a family. However, being a greedy little fox, I'm growing 11 varieties (green, yellow, stripey, long & round. In pretty much every combination) of courgette & summer squash.
If you haven't already sown some courgette seeds, you've still got time to get some in the ground. Once the risk of frost has passed, you can sow them directly, but I like to start them off in pots under cover. Once they have 3 or 4 true leaves (the big, fuzzy round ones, not the little oval ones that first pop out of the soil), they're ready to face the world. Harden them off for a week or two, then plant out (if you sow directly into the soil, you don't have to faff about with hardening them off). Once in the ground, watch out for slugs & snails which will chomp their way right through the main stem. Bastards.
Cultivation is mostly throwing water at them in dry spells (though they're prone to powdery mildew, so don't splash water on the leaves), and feeding every week or two once fruit starts to form. Trailing varieties cane be coaxed into a circle with a few pegs, or up sturdy bean canes.
If you're not as greedy as me, you may end up with an excess of fruit (though I've yet to experience such a thing). Courgettes are a great addition to chutneys, mixed sweet pickles & piccalilli, and can also be chopped up, roasted & slung in the freezer to be used over winter when courgettes are eye-wateringly expensive (and taste like crap) 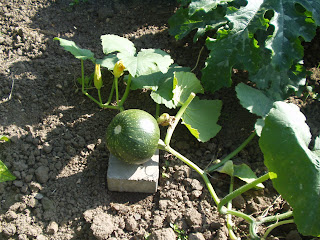 Pumpkins & Winter squashes are grown in more or less the same way, though they need a lot more space to grow, as they trail & meander around like they own the place. I dot them around the sweetcorn patch & at the base of my climbing beans, where they suppress weeds & keep the roots shaded. Thy need a much longer growing season than courgettes or summer squash, but they mostly take care of themselves. People into giant pumpkins will pinch out the growing tip once 3 fruits have set (and go unspeakable things with string & pots of water to really bulk out the fruits). Each vine should give you 4 or 5 fruits, and you can pinch out the growing tip if you like (though my pumpkins seem to take that as a challenge!). As the fruits form, place them on a brick or lump of wood, to stop them rotting. The first hard frost will turn your beautiful fruits into mush, so keep a close eye on them in September & October, and be ready for some speedy harvesting.

Right, off to plant out some Squashes. I'm growing 18 varieties this year. And one slightly confused marrow.
Posted by littleblackfox at 23:36 2 comments:

Labels: Grow your own, Pumpkins 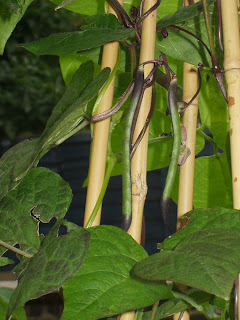 After last years experiments with growing French beans for the ripe seeds as well as than the immature green pods, and spending the cold winter reading "Beans: A History" by Ken Albala*, this year in the garden has become a little bit bean-fixated (though with the 3 varieties of sweetcorn & the several billion squashes, perhaps milpa-fixated is a more appropriate term). Tall, dwarf, yellow, purple, green, spotted & speckled, from the highly ornamental but still very edible 'Dolichos Lablab' (also known as the Hyacinth bean) to the basic green bean 'Blue Lake', they're all growing here.
And with good reason, beans were one of the first plants to be cultivated, and due to their ability to crop well on even the most impoverished soil, meant the difference between life & slow & horrible starvation for nearly every culture at some point in history. They also dry & store easily. Unfortunately, their very reliability has them dismissed as "poor man's meat".

Well nuts to that, beans are awesome! There are few other veggies out there that offer such variety - they can be slender 'filet' pods, or large & flattened like small runner beans, or even curled up like shrimps. They come in green, yellow & purple coloured pods, and then there are the beans themselves! Creamy white haricot, green tinged flageolets, shiny black turtle beans, smooth brown seeds & an almost infinite variety of cream or white seeds speckled with red, brown or black.

There are roughly two categories that French beans fall in to. Climbing beans reach a height of 2-2.5 meters, and need supports to climb up (bamboo canes in wigwams or 'toblerones' are the most common methods, but they are very pretty growing up a trellis or against a warm sunny wall or side of a shed). Dwarf beans grow into small, bushy plants around 45cm tall, and shouldn't need much support (though you can give them a supporting layer of twigs & brush if you're growing them for dried beans, to keep them from flopping over under the weight). Dwarf beans take up less space & are easier to maintain, but climbing beans will give a bigger crop. The seeds are sown from April to July, and will give you a crop of succulent pods from June to October. Seeds are best sown in pots or trays before planting out after the last frosts. For some reason they seem to do better started off in pots than with direct sowing. You can also speed up germination by soaking the seeds overnight, though it's not essential.

After that, there's not much they need, aside from the odd bit of string to encourage them to go up the pole, rather than whatever crackerarsed direction they're actually headed in (or maybe I'm just blessed with particularly dumb beans) & water in dry weather. Squashes & pumpkins can be planted at the base, to suppress weeds & scramble up the canes. I found the winter squashes Marina di Chioggia & Uchiki Kuri worked really well, roving around the beans without getting in their way (and giving me the occasional shock when harvesting beans and brushing against a knobbly, ripening squash!).

The young pods freeze well, and the ripe beans can be frozen or dried too.

Okay, off to finish planting out Tomato Mile.

*A lot more interesting than it sounds. Did you know that St Jerome forbade Nuns from eating beans as they partibus genitalibus titillationes - "Tickled the genitals". Aww, poor nuns!
Posted by littleblackfox at 05:41 No comments:

Labels: Grow your own, use of the word 'crackerarsed'
Newer Posts Older Posts Home
Subscribe to: Posts (Atom)