Back To The Garden

It's a sunny day here in North Lincolnshire. I could blog about vegan sausages, Pineapple chutney or how much I love Coconut Kārums, but instead here's some photo's of what's happening in the garden.


These are Golden Sweet peas, which have been producing lots of delicious, sweet & juicy mange tout style peas, they're so tasty I've been adding them raw to salads. The peas are quite tall, they've almost reached my height! They came from Seeds of Distinction (though you can find them in a variety of seed catalogues). This is my first year of trying their seeds, and have found them to be excellent quality with high germination rates. I'll definitely be saving seeds from these to grow next year!
The other thing I love about these peas is their beautiful pale blue flowers - so pretty against the green leaves! 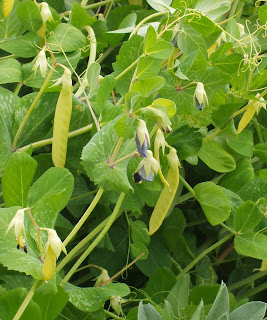 Ezethas Krombek Blau is the tongue-twisting name of another pea variety I'm trying out this year. It grows as tall as the Golden Sweet, but with delicate pink-purple flowers. They are a real pleasure to look at when pottering about in the garden. The pods are an impressive dusky purple, though apparently the peas themselves are green.
I'm also growing green peas, Asparagus peas & Parsley peas too! 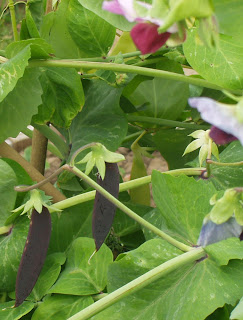 The Barn Swallows that nest each year in my woodstore zip around me catching insects while I'm gardening. They quickly worked out that I wasn't a threat when they first arrived, just some lumbering great herbivore. So I've been able to watch the chicks get fatter & fatter over the last few weeks. It's a miracle they can all still fit in that nest! 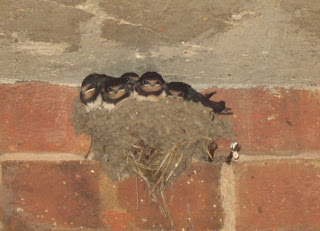 Where ever you are, I hope you have sun, good company & a patch of earth to dig in
Posted by littleblackfox at 04:52 1 comment:

Yesterday was the Summer Solstice, the longest day & the shortest night of the year here in the Northern hemisphere (no, I couldn't get to sleep either, and Mikeyfox announced at 5am that he was not only getting up, he was also going to cycle to work*).

To celebrate, we took a trip across the the Trent** (that big ole muddy river) to visit Julian's Bower in Alkborough, North Linconshire. Julian's Bower is a Turf Maze or a Miz-maze (technically a Labyrinth - a single path twisting to the centre), which were once found across England under various names (usually referencing the city of Troy), but now only a handful remain-the Alkborough example is the last surviving Julian's Bower (The name stemming from Julius, son of Aeneas of Troy). The design is based on the Classical (or Cretan) Labyrinth. Luckily this one didn't have a Minotaur waiting in the middle. Phew!
Opinion is divided as to whether turf mazes were constructed for fun or for punishment. After having a go, I'd say they were fun! 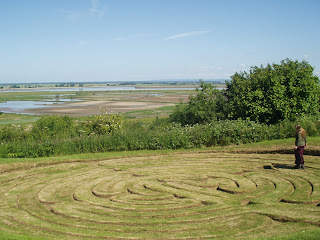 The bower is on a hill overlooking the uniting of the rivers Trent (that big ole muddy) & Ouse, and the RSPB reserve Blacktoft Sands (home of the bearded tit. Snerk.).

Below the Bower is the Alkborough Flats, a habitat for wildlife on the edge of the Humber flood bank, home of numerous things tweety, fluttery & migratory, and a lovely setting for an afternoon of ambling about and saying 'Ooooooh' while pointing at things.

*18 miles away. It took him 1 hour 40 minutes. Beer and Tiger balm await him when he cycles home. Nutter.

**One of the peculiarities of the Trent is that it's not easy to cross it. It's a tidal river, and a dangerous one at that, so swimming, wading & paddling across in a dinghy are out of the question. So it's a 20 minute drive down to Scunthorpe to the nearest bridge if you fancy a pint there. Until we get an aquacar.
Posted by littleblackfox at 00:35 1 comment: