Sowing The Seeds of Destruction (and radishes)

It's March (only just), so there's still time for the annual roundup of Seed Suppliers. Woo!

I've always been something of a compulsive seed-purchaser, and moving out to the arse end of nowhere & getting a bigger garden (not to mention the impending allotmentiness) seems to have brought out the worst in me (there's even enough room for -gasp- flowers! Ones that you don't eat, just look at cause they're pretty!). Mikeyfox managed to hold me to one agreement, no greenhouse plants (lacking a greenhouse as we are, and not living in the middle of a city & having that few degrees warmer thing that meant you could get away with growing some greenhouse stuff outdoors. You can get away with that in Sheffield, but not so much in North Lincolnshire).
Still, I have funky tubers (Oca, Yakon, Crosne & potatoes in various colours), legumes, radishes & other root veg of every shape & colour, more squash than is really wise (and most looking like the more outlandish spacecraft designs from Star Trek). Generally speaking, if you can't buy it in a shop, or have never eaten it (possibly never heard of it, unless you read a lot of Mexican cookbooks*), I'll probably have a pack of seeds for it here... 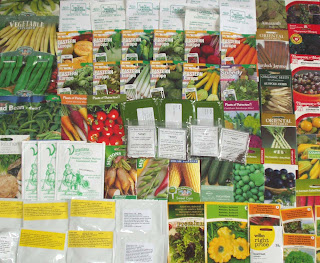 So this years favourite seed suppliers are;

The Real Seed Catalogue yes, I've mentioned them before, but I loves them. They have excellent advice on seed saving & storing, and the seeds have the best germination rate & are all excellent quality.

Plants of Distinction An excellent range of weird & wonderful veggies. I love their colourful collection packs too (if, like me, you're mildly obsessed with growing familiar things in strange colours, the packs of beetroot, radishes & caulis in all the colours of the rainbow are a great find). The seeds have a good germination rate too, and I'm practically giddy over their Czech tomato seeds!

Victoriana Nursery A family run nursery who grow most of what they sell, and have a good range of older, non-hybridised seeds. They use compostable materials in their packaging too. I know it's probably an odd thing to pick up, but getting plastic & polystyrene packaging from seed suppliers really bugs me. Shredded paper can go straight onto the compost heap (or paper block maker). What do you do with a box full of polystyrene?

Lidl A friend of mine got me onto Lidl's seed ranges a few years back. I was initially unconvinced, but it's 28p-47p for a packet of seeds, so what's the worst that can happen? The seeds are actually pretty good, and there's some good salads & root veg.

The sun's come out, so I'm off to sow some yellow cylindrical beetroot!

*Yes, I'm looking at you, Jicama
Posted by littleblackfox at 01:15 1 comment:

Hello Blog.
Yes, I know, I have been a poor and inconstant blogger. The shame. Turns out that running a brewery, lurching towards self-sufficiency & fixing up the Shack in the Marshes* takes up a lot the day.
Still, the damp course & guttering are all done, leaving only the mortal horror that is THE DRAINS. That will be fun.

And since I was in danger of having some free time (and finally breaking the cellophane on Bioshock 2), we now have an allotment. Woo! More on that another time.

Fortunately my glamorous assistant has been most helpful with the garden. 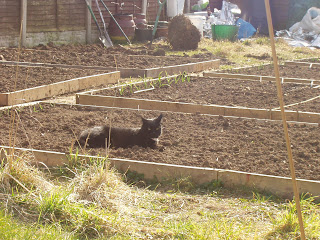 *Formerly known as project Shack in the Peaks. Not having a spare million pounds lying around meant lowering our sights a little. To about 4 meters above sea level...
Posted by littleblackfox at 02:10 1 comment: