Hello Blog.
Yes, it has been a long time. No chutneys, no recipes, no knitting. Whatever have I been doing?
Well, in February MikeyFox & I were made redundant. A lot of serious conversations were had, business plans were written, sacrifices were made to the appropriate deities, our firstborn was offered to the local bank in exchange for coin of the realm & some evening classes were taken, and thus was born The Goddamn Plan 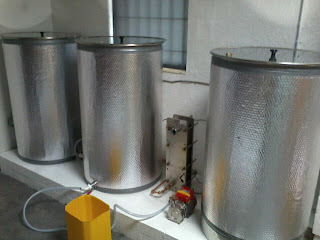 Behold! We now have our Own Damn Brewery! In April we started renting a unit in Scunthorpe, and a crash course in plumbing, engineering, carpentry & electronics followed. B&Q was visited frequently. There were tears, there were several litres of chamomile tea, there was a cafe opposite the brewery, where we were taken pity on, and given copious amounts of strong, sweet tea, extra chips & small items of furniture. MikeyFox finally got to make use of his graphic design skills, electricity was applied, malt & hops were ordered & we made our first beer in July. 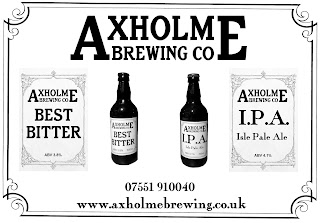 The first brew shall not be spoken of. First brew are never fun, or easy. But things improved, we figured out how to improve things, fixed the bits that broke, or exploded. Beer was made, and people liked drinking it. We started bottling the beer in August (which sold out in half an hour, oops!), and in December had our first local market stall 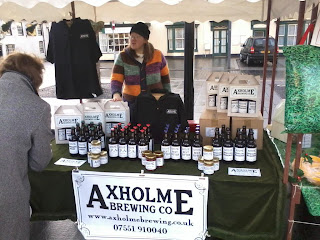 But enough about me, how the devil are you?
Posted by littleblackfox at 02:11

Welcome back and may 2013 be a great year for you all.

Well done you! What a great plan. I really hope you have great sales figures and it's all a huge success. And if there's ever anywhere in about 30 miles of Derby that I can sample some, I promise to buy!

Gosh, you have been busy. You sent me lovely seeds last year, I know you said they were a gift and I haven't forgotten I agreed to send you something in return. Now you are back I feel I can work out something you might like. Wishing you well with the beer. I had a Honey beer once and I loved it Honeydipper twas called from near Ross on Wye, anyways best wishes for the New Year.

Well done, I love it when a plan comes together. Always liked your blog too.

Yahoo, yer back! Loved the blog post, and am so pleased for you!! Just love reading positive excitement and great success stories, even if they start out with the dreaded word, redundant. High five.

Great to hear of your ups (sorry to hear about preceding downs). You are both stars for what you've done. Chris

Hi all,
Wow! I can't believe the responses I've had! Are you really all still reading my odd little blog?

MorningAJ - I was on the phone to a place in Derby this morning! The Little Chester Ale House, ever heard of it?

There will be brown envelopes again soon ;)
lbfx

Welcome back and the best of luck with your new venture.