This recipe is inspired by the Indian snack Boondi (small, round gram flour balls deep fried in oil & served with yoghurt), but actually bears more of a resemblance to English dumpling, as it's much larger and steamed, rather than deep fried, though they don't have any raising agents like baking powder in them. So Pumpkin dumpling, then...

Mash the pumpkin in a bowl with a fork. Add the spices, semolina & seasoning & mix thoroughly. Add the gram flour & work into a soft dough (if it's too wet, add gram flour a little at a time. If it's too dry, a splash of water). Roll into balls about the size of a walnut (if you have one of those coffee scoops that come with cafetieres, they're a quick way of making a good sized ball).
If you want to freeze some for using later, arrange on a tray & pop in the freezer. When they've frozen, tip into a bag & try not to let it get stuck behind the peas, only to be rediscovered 3 years later when you've completely forgotten what they are.
To, cook, just drop them onto any pan of wet curry that you're making, cover & leave to steam for 10 minutes (or you can just steam them & serve with yoghurt & a squeeze of lemon juice).

So, not really a recipe, but an extra to liven up something you're already making. 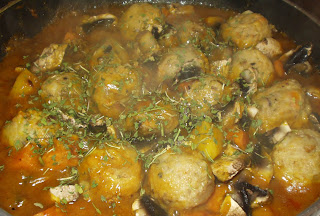 *Though it works really well with milder curries like pasanda & korma
Posted by littleblackfox at 09:19

Am definitely bookmarking this one - and I LOVE the idea that you can freeze them (not much danger of forgetting them in our household). I think they'd be lovely in a spicy tomato sauce, sort of like pumpkin gnocchi?

Hello Kitchenmaid - I love your blog! I'm going to have to try those spelt slices soon!

Yes, they work really well in a spicy tomato sauce. Just drop them in the sauce, cover and allow to steam for about 10 minutes. They're a softer texture than gnocchi (one of my favourite things!), no matter how many times I try, I can't quite manage pumpkin gnocchi, it always comes out too wet.
They're also really good in a mustardy mushroom sauce too.