A Day in Manchester

As well as taking me to the lovely Hardstoft Herbs, MikeyFox also took me to Manchester to celebrate my birthday. I am a lucky wee fox!

We spent most of our time walking around the city. I used to visit it often as an art student, and later MikeyFox & I would go to gigs at the Academy, Bridgewater Hall, and even saw Will Oldham* at the Manchester Cathedral, so it didn't require hours of making maps on Google.
We visited a lovely health food shop called On The Eighth Day, it's a workers co-op shop & cafe, run by a lovely group of people. If you're ever in the area, I really recommend a visit, if only for their excellent range of dried chillies! 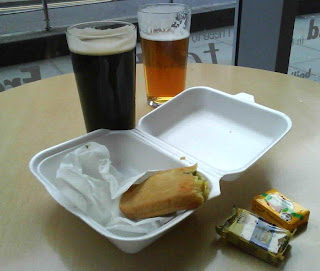 Whenever in Manchester, we always go for lunch at the Arndale Market. Tacked onto the end of the Arndale shopping centre, the Market is crammed full of food stalls offering everything from the usual Greek, Italian & Chinese stuff to Japanese, Mexican, Jamaican, Korean & Brazilian. We resisted the tostadas & decided to visit the Brazilian snack bar, where we had pastels. Pastels are a typical kind of fast food in Brazil, somewhere between empanadas & deep fried pasties. MikeyFox said they reminded him of Findus crispy pancakes. These fried treats were filled with cheese & vegetables. Yum! They were washed down with a pint from the Boggart Brewery's Micropub. Dessert was a paçoca each. Paçoca (a Brazilian native word meaning 'to crumble') is another Brazilian treat, a peanut candy with a texture similar to fudge. Sweet, salty & crumbly, I'll have to learn how to make them, they were delicious!

Fortified with beer & fried things, we went in search of excitement in China Town. We bought some lotus seed Mooncake & red bean paste buns (an allotment treat for the next day) from Ho's bakery, along with some Pearl Tea, which we drank under the beautiful archway. I even finally found a Jicama, which made it the Best Day Ever. After 3 years of trying to track one down I can safely say that they're delicious, and worth looking out for! (though possibly not as obsessively as I have been). 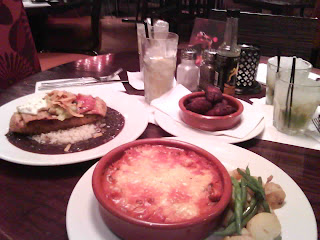 For dinner we went to Las Iguanas, a Latin American restaurant on Deansgate. The menu was excellent, with lots of Vegetarian options that weren't just flour 'n' beans. I was sorely tempted by the Moqueca - a dish of sweet potato & coconut served with rice & plantain, but in the end opted for the Chilean pastel de choclo. I'm glad I did, I loved it! I could have eaten another one! How could you not love a South American version of Shepherds pie with a base of squash, sweet potato & chickpeas topped with creamy mashed sweetcorn! MikeyFox went for cheesy pumpkin chimichangas. For dessert, we fought over macadamia & dulce du leche cheesecake & a sticky Ipanema mess of guava, yoghurt, raspberries & crushed meringue. 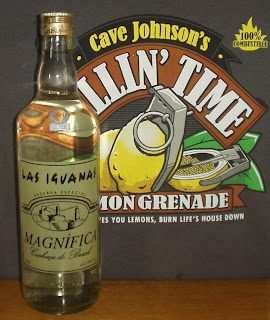 You might have noticed drinks in that photo too. Yes, there were drinks. MikeyFox, being the designated driver (ie. the one who has passed his driving test, and never made his instructor, a burly man in his 50's, cry and hug the steering wheel) had cranberry & lemonade. I had caipirinha, the national cocktail of Brazil (again with Brazil), which means 'hillbilly' or 'bumpkin'. How can you not love a drink with a name like that? It's a giddy blend of a whole lime bashed with sugar & lots of cachaça. What's cachaça? It's a bit like rum, only its made with fresh sugarcane juice rather than molasses. It's Brazil's favourite liquor, with 1.5 billion litres quaffed annually. It has over 700 nicknames, my favourite is omim-fum-fum!
Turns out Las Iguanas has their own sugar cane plantation in Brazil, where they make their very own cachaça. The lovely staff were happy to provide us with a bottle to take away, and instructions on how to make caipirinha. Bless 'em!
I also got a Lemon Grenade T-shirt, which makes me unreasonably happy.
Until next time, when I'll be back to talking about vegetables. And possibly ketchup.

*I kid you not. Alas, he didn't sing 'Drunk at the Pulpit'