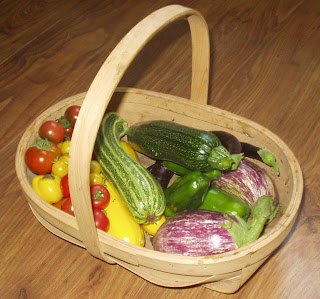 This was my first year of growing aubergines in the little polytunnel. I grew Listarda de Gandia, a very pretty purple variety with white stripes, early ripening & very reliable (you can see it in the picture on the right, along with the tomatoes, green peppers & courgettes that went into the recipe. How pretty are they?!)
I also grew Diamond, a Ukrainian variety with clusters of long, intense purple fruits, and Orlando (the unnervingly long, curly purple things skulking under the courgette in the picture)I will be growing both varieties again next year! (and maybe one or two more!)

Rather than chomp them all (mostly in a Spanish style ragout with roasted tomatoes & chickpeas - om nom nom!), I decided to make some pickle, so I could continue to appreciate them in the cold winter months. 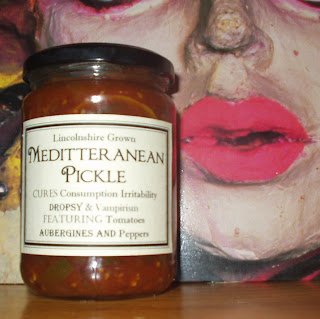 Place the tomatoes, peppers, aubergines & courgettes on a large tray & roast under a hot grill until the skins blister. Leave to cool, and remove the skins from the peppers & tomatoes. Chop the roasted vegetables into even sized pieces, as coarse or as fine as you like (I like them chunky). The aubergines can disappear into this chutney, so if you want aubergine chunks in it, set them to one side, to stir in at the end of cooking. Heat the vinegar in a large pan. Add the sugar & stir until it's dissolved. Add the salt, paprika & herb bundle. Add the onions & garlic, then the roasted veg. Stir gently, so everything doesn't get too mashed up (or stir vigorously if mashed up is your kind of thing) & simmer until the mixture is thick & glossy. This can take as little as 20 minutes, or over an hour, depending on how wet the vegetables are. Remove the herb bundle & spoon into sterilised jars. Leave for at least a month, preferably two.

I did a spinach and onion pizza at the weekend with what I've managed to harvest off the perpetual spinach.

My growing season has been awful and I managed to raise just one plant. But it's being kind to me and growing back, bless it. So it'll be the first of several, I hope.

You're doing better than I am! We had such a dry spring that I didn't get any perpetual spinach! I have some late sown ones getting going now, which will keep us in greens over the winter.
Spinach & onion pizza sounds delicious, I'll have to give that a try!