Now that our 3 little chickens have settled in and regrown all the feathers (and a fair bit of - ahem - insulation), they've started popping out eggs like feathery little pez dispensers! We get two eggs a day, occasionally three (and one time after they escaped and ate the neighbours petunias we were surprised to get four!). Life BC (Before Chickens) was one of limited eggs, usually bought from the woman up the road who keeps chickens & geese free range in her garden & sells her excess eggs. Now I have a dozen or so eggs a week. They get given to friends and family, but still, it's a lot of frittatas! So I've discovered the delights of curd!

When I was a cub, lemon curd meant one thing - watching in mild bemusement as my Mum stomped around the kitchen whipping up lemon curd (as well as strawberry jam, shortbread and Victoria sponge cake) for the WI Country Show in the hopes of winning the coveted trophy. Lacking any kind of competitive streak, I could never understand the appeal of baking for trophies (or, in my Mums case, So-Pat-Down-The-Road-Doesn't-Win-It), but nevertheless whisked eggs and creamed butter, and dodged any flying cutlery.

Curd is an intensely flavoured spread made with a decadent mix of butter, eggs & sugar. Such indulgent fair needs citrus to curb its enthusiasm, so lemon, lime, orange and even raspberry are added. But it was still always a little too rich for my tastes. But I was in my local Asian grocers and saw a box of Alphonso mangoes... hmm.

Alphonso mangoes, named after Afonso de Alberquerque*, the 16th Century Portuguese military commander and Muslim-botherer (known as The Lion Of The Sea. If you take a moment to think about a Lion in the sea, and how pissed off he might be about it, you're halfway there. Bearded, damp & psychotic comes to mind.) are not the sort of thing you'll find in your local Tesco. It has a short season, late April to June, and is grown in Western India. It comes either individually wrapped in tissue paper or in a cardboard box of 4 or 6. Alphonso aren't cheap, but they are worth it! Sunny yellow skin covering buttery, honey-sweet saffron coloured flesh (and don't I get all poetical when it comes to fruit!). I usually just buy one or two with every intention of making something delicious with them, but they end up being gulped down, furtive & messily, over the sink. This time I bought a box of six. Two to gulp down like the gluttonous little fox I am, two to make into mango sorbet and two to make into curd. And what a delicious curd they made!

If you have a temperamental hob, make this in a double boiler (or bowl over a pan of simmering water). If you trust your hob, make it in a heavy bottomed pan. For best results you'll need a sugar thermometer which, double boiler or not, will help avoid the dreaded curdling.
If mangoes aren't your thing (and may the Cephalopod Horrors from Beyond preserve you, you poor soul) 450g of any fruit puree you can think of should work too. I've made this recipe with apple & lemon (which was softly sweet and soothing, like a fluffy yellow blanket) & Pineapple & lemon (a sharp, sweet, tangy curd, I think I'll replace the lemon with grapefruit next time). I plan on making guava & lime & banana & lemon soon too. Play with the recipe & make it your own, just remember it needs the citrus element to balance out the sweet richness. 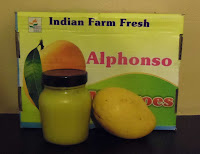 Cut open the mangoes & scoop the flesh into a blender. Give the stones & skin a good hard squeeze to get as much of that lovely flesh & juice out. Add the orange juice & zest & wizz to a puree.
But the butter, sugar & mango pulp into a large pan over a low heat. Whisk until the butter & sugar have melted. You'll need the sugar thermometer at this point. Make sure the buttery mangoness is no hotter than 55°C, 60°C at the most. Any hotter and your eggs will scramble. And it will be a sad day, a day of mourning. Dogs will howl at you in the street, for They Will Know. Pour the eggs through a sieve into the pan (the sieve is to catch any of the stringy white bits that wont blend into the curd and make it look a bit unsettling. You can wizz the eggs in a blender, since its already had mango in it, instead) and whisk thoroughly. If it looks like it's starting to split, remove from the heat and whisk madly until smooth.
Keep the pan on a gentle heat, giving it a whisk and scraping down the sides every minute or two. After ten minutes or so, it will start to turn thick & creamy. Don't rush this stage, and keep an eye on the sugar thermometer, which should read 82-84°C when its ready.
Pour into warm, sterilised jars & seal.
Use within 4 weeks, and once opened store in the fridge.

Serve on toast, spread on warm bread, spoon into yoghurt, spread onto sponge cakes, blob on the top of muffins, add to pastries, stir into cake mix, use it as an excuse to make meringue pie, swirl into ice cream and always, always lick the spoon!

MMMM Mangos... I just love those mangos not seen any since India.
I bet mango and orange curd is bliss... lucky you!!

Oh yes, I want some of your mango curd. I've fallen in love with curd again in the last year or so after not having made it for years. My favourite so far is passionfruit, but I think mango might be a strong contender. I also have raspberry on my list and blackcurrent - it's all so exciting!

OOh I so have to make this, esp. as my sister in laws have given me three ripe mangoes this week. Hope your well x

you make it sound sooooooooo good! Will have to try it!
hugs
bb
Cynthia
Faerie
Delfynasa